You Are What? Going to Australia Again? 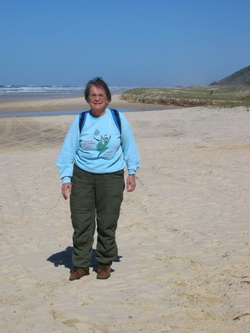 Sunshine Coast, OZ, 2008
The title of this piece is what Alte Cocker's friends say when she announces another Australian trip.  I've been 3 times in the last 5 years.  I am no longer stating "This is my last trip to Australia" because I never know if it is or it isn't anymore.  Australia is one huge country.  In fact, it's larger than the US, but, unlike the US, almost no one lives in most of it.  The current population is about 23 million.  The population lives around the edges because, for the most part, in the middle, there is no water.  The aboriginal population is very small and concentrated for the most part in remote areas.

Warning: You should now get out a map of Australia and New Zealand before reading the rest of this piece if you want to know where all the places are.

So, how did all my trips to Australia get started.  It was maybe 2007 when I heard from a couple in Kawana Waters, on the Sunshine Coast in Queensland.  Did I want to swap?  I wasn't sure.  It was the usual American response: "It's so far."  Of course, it's just as far for Australians to come to the US, but they come.  What I did is something that I had never done before.  I organized a trip with multiple exchanges.  I got a second exchange in an apartment in Brisbane--the apartment that will be forever remembered as "the one with the ants".  Ugh!  Then I got a 3rd exchange in Kamo, on the North Island of New Zealand and the trip began to take shape.  Airline tickets for something as complicated as this are always bought virtually simultaneously.  That way everyone locks in together and no one worries about, well, getting screwed, if someone pulls out.  After thinking about how I was going to do this, I decided to stop over in Fiji and stay in Nadi for a few days before flying on to Sydney for 5 nights and then onto my home exchange in Kawana Waters.  Brisbane is only a little over an hour from Kawana Waters, so that transfer was by bus.  From Sydney I flew to Auckland and met my New Zealand home exchangers at the Auckland Airport before their flight to the US.  I picked up their car there and drove approximately 3 hours to their home in Kamo.  Kamo, for those of you who know New Zealand (and those of you who do not) is in the Northland district of the North Island.  It is just Northwest of Whangerai and between Whangerai and the Bay of Islands.  Kamo itself has nothing to recommend it as a tourist destination.  It was a bed.

I returned home from Auckland.  It was supposed to be Qantas (aka "air delay"), but I was rebooked on Air New Zealand when Qantas got delayed.  I was still practicing law in those days before retiring into AlteCockerhood.  I remember staggering into the courthouse without sleep and having the judge say to me, "You're late Ms. Kahn."  My response was "You are lucky I am here at all."  When you fly home from Asia or Down Under and your flight is delayed, getting home can involve huge delays because there are not 75 flights on which they can rebook you.  If a flight gets cancelled in Europe, it's easy to get to the US East Coast.  From New Zealand, no.

So I figured I was done with Australia after that.  It it so expensive there it makes Norway look like a bargain.  Two years later, however, an offer came in from Melbourne and the deal was done.  I tacked on a deal in Christchurch onto it and that really was the last trip to Down Under, right?  The international itinerary was booked through Air New Zealand and the Melbourne-Tasmania-Melbourne flights were on the Aussie discount carrier Jetstar.

On my exchange in Melbourne, I did a side trip to Hobart, Tasmania for 3 nights--or "Tassie", as the Aussies like to call it.  I loved Tassie.  I wanted to stay for a long time there.  I wanted an exchange there.  Well, my home exchanger in Melbourne had exchanged with someone in Tasmania.  I think you already know where this is going.   A deal was struck and I tacked a deal in Canberra onto it.  Deals agreed to way in advance have a way of not happening.  Tasmania backed out due to illness and I was looking at a deal in Canberra--a town that has a deserved reputation for being boring (albeit with a lot of museums)--and nothing else.  The couple in Canberra was so excited about coming to my place (They had been to the area once before and couldn't get enough of it) that I just did not want to disappoint them by cancelling the whole damn thing.  So, I had the deal in Canberra and was forced into totally redoing the trip.  Up my information went on my home exchange pages again and I ended up with a deal in the Blue Mountains west of Sydney, then Canberra, and finally central Sydney.  I never did get Tasmania because there were not a lot of homes listed there.  I thought I would have to go there on a hotel stay or bag it entirely.  As luck would have it, however, someone from Tassie wanted to exchange hospitality for 3 nights chez moi.  I ended up with a 3 night free stay in Hobart in return and spent the other 4 nights in rural Tasmania in hotels.  I took the Tasmania week out of the Canberra exchange.  And so the third trip was put together.  The international flights were via Qantas (no delays this time) and Sydney-Hobart-Sydney was done via Jetstar.  To get from the Sydney Airport to Canberra (and return to Sydney in the city) was done via Murray's Bus.

I am not announcing for a 3rd time that "This is my last trip to Australia," because it probably isn't.  However, for a 4th trip I really want Cairns because I have not (yet) been to the Great Barrier Reef.  Then there is this guy from Perth who contacted me while I was in Sydney.  When I phoned him, he nearly fell over when I said I was in Australia and not calling from the US (I had minutes left on my Aussie cellphone, so what the heck?).  Who knows?  Cairns and Perth do not go together very well, but, again, who knows? (For the geographically impaired, Cairns is in the NE of Australia while Perth is in the SW--as far away as one Aussie city can possibly be from another).

Australia, it's a big country.  You can't see it all in one go.  Will I go again?  Definitely, if someone gives me a swap from Cairns in the Australian winter (July or August).  In summer it is too hot and there can be cyclones (pretty much the same deal as a hurricane) in Cairns.

Stay tuned for more on Australia and New Zealand in the future.
Powered by