The Trip from Hell 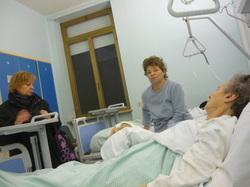 Alte Cocker's roomates in the hospital
What do you do when your trip turns into a disaster?

There I was in Rome on December 5, 2011, a day that changed my life forever.  It was, of course, another home exchange.  I was walking toward the Trevi Fountain with a girlfriend as I started to show her the sights of Rome.  I had been there before and had everything organized to share with her.  It was raining.  We passed a vendor.  The cobblestones were wet and I fell.  At that very moment, in agonizing pain, I realized I had had a major accident.  I announced to my friend that I thought I had dislocated my shoulder.  I wish.

The ambulance came and my interaction with Italian socialized medicine began.  In pain, the ambulance, without sedation (not allowed in Italy in the ambulance) transported me to the main hospital on the island in the Tiber while giving my girlfriend a tour of things she could see out the back window of the ambulance.  I was diagnosed in the first hospital and saw my horrible x-rays (x-rays I would never see again, by the way) and then, after my girlfriend left, sent to Vannini Hospital in the Rome suburbs where I was put in a ward with 2 other women (photo of them above).

My girlfriend had no idea where I was. Fortunately, she is not a person who panics easily.  She had the one phone that went with the home exchange.  I kept asking for a computer to send an email to her.  She was about to call the American Embassy to report the problem of a missing American when a kind doctor lent me his cell phone and we sent her an email with my location and phone number.  Was I ever relieved to hear from her!  I told her that the vacation was over for me but she was to visit the excavation under St. Peter's the next day without me.  She went and said, as I knew she would, it was wonderful.  I told her not to come to the hospital as she had better things to do--as in going to see the Vatican Museum.

Even getting up and going to the toilet required assistance.  There were 3 women in the ward.  We helped each other.  There was no privacy.  If a doctor wanted to insert a catheter, everyone got to watch.  Some nurses were good but a special place in hell is reserved for the nurse who slammed my bed down one night.  I used the toiletries in the bathroom thinking they were hospital toiletries.  I only found out at the end of my 6 day stay they belonged to one of my ward mates.  What did I know?  In Italy they bring clothes and medications from home.  Since you are liable to be sent anywhere there is a bed, old people keep a bag of necessities by the door.  For much of my stay, my roommates were an elderly woman named Yolanda (who we quickly named "Mama Yolanda") and a Romanian woman with some sort of back problem.  Mama Yolanda is the one in the foreground in the photograph.

There were an unending series of different doctors and instructions not to eat as I was in the queue for surgery.  I might have surgery today, maybe tomorrow, don't eat.  Then, from not eating, my blood sugar crashed and they decided I had diabetes and started sticking me to test my sugar levels all the time.  It was from not eating, stupid!  When I finally could eat, they took half my food away.  I finally stopped the finger sticking by refusing it.

On December 7, 2011, I had surgery to insert a rod and pins (more like enormous screws if you ask me; I still have them as a souvenir from the trip).  When I was wheeled into surgery, I realized an intern was administering anesthesia and the doctor?  He was not one of the ones I had seen.  When I woke up, they took me back to the ward and my girlfriend was there with some clothes and, accidentally, my camera was in the bottom of the bag.  Was I ever glad to see her but they had pumped me full of fluid and would not allow me to go to the toilet.  Of course, what goes in has to come out and she soon left and left me to my misery.  I was not happy when the nurses got upset with my frequent cries for the bedpan and threatened me with a catheter if I didn't stop.  Duh.  Missing some logic here?

The Italian hospital system is sort of a direct opposite of the American system.  Instead of releasing you post op, you have to fight to get out.  Finally, I lied about my departure date in order to get released.  I was in the hospital for a total of 6 days.  One of the questions I wondered about was how I would pay for all of this.  Bless the Italian hospital system.  It's socialized.  They have to treat everyone if they have an emergency.  I did sign some sort of paper but I don't know what it said.  They just pushed it in front of me and said, "Sign".  I should tell you that I now have travel insurance--a bit late to the party.

When I finally got out of the hospital a few days remained of my wonderful trip.  On one day I managed to go into town.  I took my girlfriend to Piazza Navona, where, at Christmas, there is a nice Christmas market.  While she strolled through the busy market, I sat down in fear of accidentally being bumped on my very sore shoulder.  Who do I know in Rome?  No one.  I looked up and who did I see?  The family of Mama Yolanda from the hospital.  We gave each other big greetings in a mixture of languages and they asked how I was.

After that excursion, I never left the exchange apartment again.  It was just too exhausting for me and I was in a lot of pain.  I did see to it that my girlfriend saw things, however.  She did get to the Vatican Museum and Ostia Antica.  As for me, what I needed was bed rest--not sightseeing.  I was never so glad to end a trip and go home--albeit worrying about passing out on the airplane and being put off the plane.

When I got home I saw an orthopedist who eventually took out the rod and pins in a second surgery.  He said the arm had healed and I began physical therapy.  I wish I could say that this was the end of it, but it wasn't.  The fracture repair broke apart and I eventually had what is called a reverse total shoulder replacement on September 12, 2012.  It has fairly normal function now, but there is still some discomfort.  Full healing, I am told, will take about a year, but at least I can change a light bulb in the ceiling!

The main lesson I learned here was to never travel without travel insurance.  I have an annual Travel Guard policy now because I do go out of the country more than once a year on average.  Sometimes I also escort groups to Canada.  How could I have been so stupid as to not have it?  I was very fortunate to have had this happen in Italy where medical care is free--as, in my opinion, it should be everywhere in emergencies.  But, I could have gone broke over this if I were a foreigner in the US.

The other lesson is not to panic.  Bad things sometimes happen on vacations because you are busy looking around instead of looking where you are stepping.  When they do, you have to deal with them and that is the way it is.  Sure, you'd rather be at home, but you're not.  Somehow or other it will all work out.
Powered by