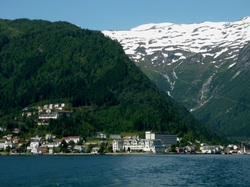 Fiord in Norway
Alte Cocker has been a lot of places on home exchanges.  You can get stuck in a rut in Europe going constantly to Great Britain, France, and Germany.  Yeah, I know.  Some of you haven't been to Europe once and I'm kvetching about getting stuck in a rut.  The problem with home exchange is that most offers come in from those countries because that is where the largest numbers of people live. In Italy I only recently got an offer from Italy that was not from Rome (No, not from anyplace you've heard of--from a small town on the Adriatic; it's tentatively set for November 2014). I've never been to Greece, Iceland, Ireland or Portugal because the numbers of homes for exchange just don't match up.  I had a serious offer from Ireland once, but I was already committed to elsewhere and they found someone else.

The key to being successful is acting fast.  If you sit on your tuchas and ponder, someone else will take that offer.  If I don't have a deal or am looking for a second deal for the successive summer, I move fast.  Home exchange deals can go down in the blink of an eye.  It is not a bad idea to have a smartphone and know how to use it.  Despite being on Social Security, Alte Cocker is quite adept with the smartphone.  In 2009 I got an offer from Lahti, Finland, and immediately accepted.

Lahti, who knows from Lahti.  Where's Lahti?  I didn't know from Lahti either.  I checked the map after accepting.  Finland has 4 million people.  When was I ever going to get another offer from there.  I accepted immediately.  Lahti, by the way is an hour north of Helsinki in Southern Finland

Lahti started my exploration of Scandinavia.  I went sailing near the Russian frontier and whitewater rafting as well.  Almost all Scandinavians speak at least some English--and teenagers speak it very well, so no language problems.  What's not to like? In the back of my mind I thought, "I want Norway and Sweden."  That happened last summer.  It began with an inquiry from Fredrikstad, Norway.  I accepted and aggressively looked for something in Sweden--sending lots of emails.  I ended up with a second deal in Taby, Sweden.  You don't have to look at the map.  Fredrikstad is an hour south of Oslo and Taby is a suburb of Stockholm.  I was off.  I found I out that the Norwegian fiords were gorgeous, but Oslo was less interesting; I was absolutely in love with Stockholm. There will be more pieces, of course, to snare readers.

Everyone bought tickets, then 10 days before the exchange, my arm fracture repair (a souvenir of my accident in Rome) undid itself.  A home exchange is not a regular vacation.  You have a commitment to honor on the other side of the Atlantic.  In my case I was looking at 8 people in the 2 families with tickets.  In my view, short of death, dismemberment or a major illness needing immediate treatment, cancellation is simply not possible.   I had 2 choices: (1) Move out of the house--cancelling my end of the adventures--have the surgery and live elsewhere for 6 weeks or (2) Arm be damned, take the vacation anyway.  Yup.  You guessed it.  I did Norway and Sweden with an unset fractured arm.  It was not the best, but I got through it with my arm in a sling.  I had the surgery a couple of weeks after I returned.  You can either sit down and cry or get on with it.
Powered by