When you Want to Exchange for a Long Time 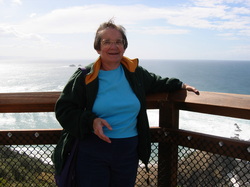 Alte Cocker at Cape Reinga, NZ.
This one is not so simple.  99% of exchanges are for 4 weeks or less.  Many retired people love to take extended trips and fantasize about spending a year in France or Italy.  I couldn't go away for that long because I have obligations and work back in the US, but I do like extended trips.

So what to do?  See that photo of me on this page?  I am standing at Cape Reinga at the extreme nothwest tip of New Zealand.  It is very windy there!  How did I get there?  I took a 3 home exchange back to back exchange trip to Australia and New Zealand in 2008.  I've been back down under twice since then--in 2010 and, most recently, in November 2012-January 2013.   I will explain how it is done.

I had never really considered Australia and New Zealand.  They were a long way away.  Someone wrote me from Australia's Sunshine Coast, and, then being on the cusp of retirement, I decided I'd take a once in a lifetime trip down under.  I stopped in Fiji on the way out (mostly to catch up on sleep) and Sydney.  I then went on to the Sunshine Coast home in Kawana Waters, Queensland.  I had a home exchange after that in Kamo, New Zealand in the Northwest part of the North Island and finished with a couple of days in Auckland, NZ.

I figured that was it for Down Under, but, of course, it wasn't.  In 2010, a man wrote me from Melbourne, Australia.  He seemed nice and I thought, "Why not?"  I went looking for a second exchange and scored one in Christchurch, New Zealand (This was before the earthquakes).  I finished the home exchange again with a couple of days in Auckland (same hotel as the first time).  During my stay in Melbourne, I did a side trip to Tasmania.  I said to myself, "If I ever go back, I am going there."

Well, my home exchanger in Melbourne had exchanged with someone in Tasmania and we made an agreement.  I then tacked another exchange in Canberra, the Australian capital city, onto it.  Unfortunately, as can happen with exchanges planned over a year in advance, Tasmania cancelled.  I was crushed.  Was I going to cancel or go.  Faced with very excited Canberrans, I decided to attempt to redo the trip.  I ended up with a home in the Blue Mountains (west of Sydney), 3 nights home hospitality in Hobart, Tasmania (and 4 nights on Tasmania's West Coast), a home exchange in Canberra and one in Sydney to finish up the trip.

I would not recommend that new people start out doing this; exchanges are a lot of work even when you do just one.  Doing them back to back is challenging as everyone's dates have to fit perfectly.  Chances are that Australians and New Zealanders exchanging in North America are doing multiple exchanges as well.  You will need to accommodate everyone's dates.  I put everyone in touch with one another so that the dates my house turns over can be accommodated.  Home exchangers turning the house over to a subsequent group then work that out between themselves because I am not really needed.

You will need to work on how to get from one home exchange to another.  It is not always that simple, as you will have to learn about the internal transportation system.  In Australia most recently, for example, I flew Qantas to Sydney.  Pick up in Sydney was arranged by my Blue Mountains home exchangers.  To get to Tasmania, I took the train into Sydney and public transportation to the airport. I stayed overnight in a hotel prior to the Tasmania leg.  I flew Jetstar to Hobart and picked up a rental car.  The first 4 nights of Tasmania were in hotels on the west coast (booked in advance using Lonely Planet Tasmania to help).  Last 3 nights in Hobart were home hospitality (They had already been hosted by me in the US).  I flew from Hobart back to Sydney via Jetstar and then took a Murray's bus to Canberra and a combination of local bus and taxi to get to the home exchange home.  After that it was just Qantas home.  Logistical challenges are part of setting up a successful trip like this.  Best part of it though is that you can get help from your home exchangers.  I had the Jetstar flights set up before leaving home but only learned that Murray's Bus ran directly from Sydney Airport to Canberra after arriving--from another American.

If you want a vacation where you are coddled, home exchange is not for you.  It can be a lot of work, but, with that, a lot of adventure as well.  Best thing about Sydney was spending time with my home exchanger from Melbourne.  As luck would have it, he was in Sydney on a in country home exchange while I was there.

If you have not read my basic piece on home exchanging and want more information, please click here.
Powered by