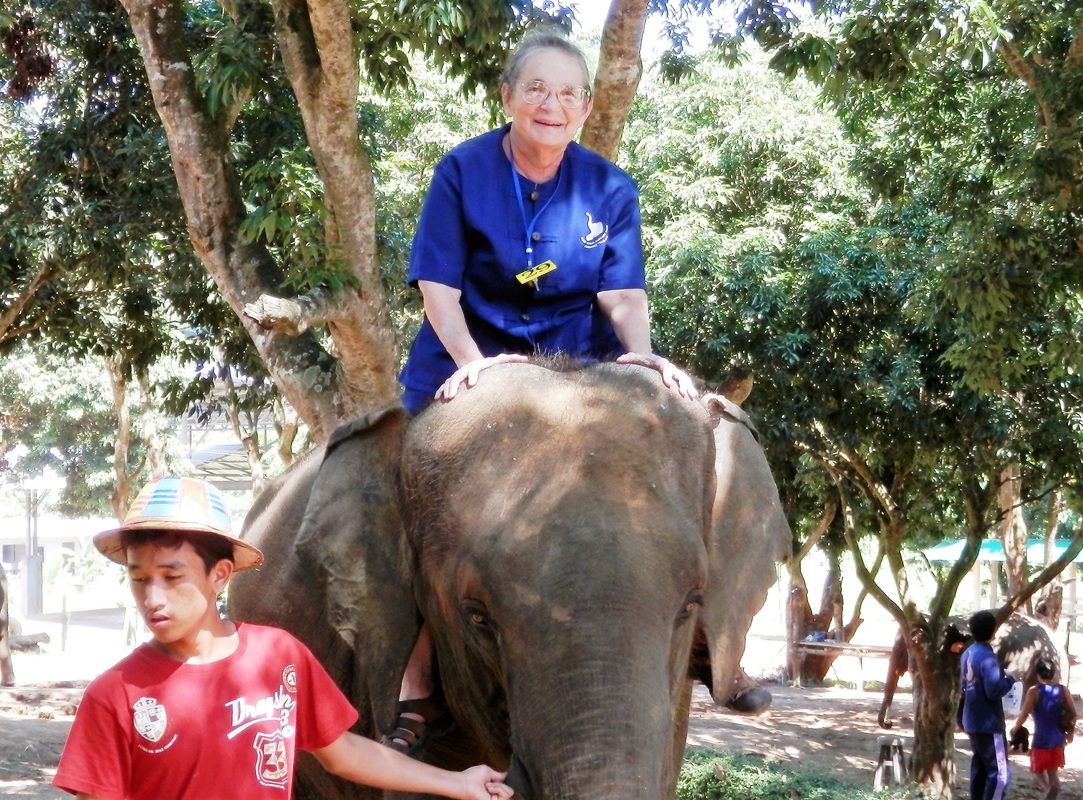 I am the AlteCocker (means "old, uh, fart" in Yiddish; actually that is not an exact translation but I never know who will be reading and we have to keep it clean).

I am still traveling.  Travel is not just for young people.  It is for all of us.  Young people use backpacks.  Older folks use suitcases with wheels due to our aching backs.  Other than that we should all be after new experiences.  I took my first trip to Europe in 1969 blowing a $500 inheritance from my grandmother on a 6 week trip with a Eurail pass--something that would cost a great deal more now.  As an AlteCocker, I wouldn't do that again--too exhausting and, ah, the pressure to max out the ol' Eurail pass.  You got to see what all the train stations in all the large cities of Europe looked like, but never stayed in any of the cities long enough to find out what it looks like.

Now I travel at a more sedate pace through home exchanges.  You stay in one place for a long time and radiate out with day trips.  You interact with the locals and become a regular at the coffee place down the street.  I am always going somewhere.

The photo above is me with a friendly elephant in Thailand in November 2014.  That exchange was not done with home exchanges.  I was based in an apartment in Chiang Mai, Thailand.  I went back to Chiang Mai in 2015 for another apartment stay (different apartment).

From July 7-end of August 2013, I was in Europe with 2 home exchanges in Toulouse, France, and Salamanca, Spain.  The Toulouse house was a diasappointment.  I did get the dreaded dirty house.  In Salamanca, however, I had a delightful small apartment--perfect for a single traveler.  The exchanger was worried that I would be disappointed because the apartment was not large.  Who cares?  As I told her, I was not hosting a wedding in her house.  I was simply sleeping there at night and Salamanca is a delightful base for adventures (and misadventures).  Between the two exchanges I had a week long stay of home hospitality in Eysines, a suburb of Bordeaux.  I had previously hosted the woman and her mother at my place.  I had a grand time with here and in Bordeaux--with a chunk devoted to just relaxation by the pool.  AlteCockers cannot go with guns blazing at tourism every day.  This AlteCocker would drop dead from exhaustion if she did.  So, if you want to follow current adventures, you should look at Toulouse, Bordeaux and Salamanca blogs and the photos that accompany them.  Further blogs are from my Costa Rica trip in November-December 2013 and Eastern Europe, Istanbul & Stockholm in 2014.  For May -June 2015 I had an exchange on the Caribbean Island of Martinique.  It was not the most exciting exchange ever, but the house was nice and I got to meet some of the locals.

There is also a blog on Madrid from the summer 2013 trip.

For 2015, AlteCocker had deals in Spain. During winter 2015-2016, she had hospitality stays in Taiwan and Malaysia. During the summer of 2016, she flew to Paris first to visit her friend from Bordeaux before heading to the home exchange home  on the Costa Dorada in Spain and finally to Barcelona in a hotel before flying home.  In 2014, she traveled to Krakow, Warsaw, Istanbul and Stockholm. Her return home hospitality stay in Taiwan was in October-November 2015 (they were at AlteCocker's in June-July 2015). After the stay in Taipei (and some excursions to other parts of the island, AlteCocker has rented an apartment in Chiang Mai, Thailand, again.  The airfare was no more than the airfare to Europe, by the way.  For the summer of 2016, AlteCocker will be in Iceland and Italy with 2 deals.  Part of the adventure is the uncertainty of it all.  AlteCocker never knows where she will go next.  Martinique?  Who thought about that?  She said "Yes" in a nanosecond.  You never know.

You can do it too.  Read on.  To access my pieces check out the drop down menu on the upper right of this page; pages are organized in categories.  For example, when you click on "Turkey: The Best Home Exchange Ever", all my pieces on Turkey from 2011 will appear.  To contact the fabulous Alte Cocker, use the links at the top or bottom of the page or comment on the blog. To find it go to the "Welcome to My Website" at the top of the page and click on it.  The blog link will drop down. AlteCocker also has her own discussion group on Facebook devoted to home exchange.  Ask to join the group!

If you have any suggestions for improvements, please let me know.  There is a contact form below if you'd rather contact AlteCocker directly rather than use other methods.

Thanks for looking in and happy travels!
Powered by